I’m going to the Lake District on Saturday (Day 27) for a week.  I shall be staying in a National Trust Cottage in Little Longdale near Coniston 🙂  So I made sure I was all organised for my trip to Cumbria!  I’m pleased I will be spending the last few days of 30 Days Wild in a stunning part of the UK!

I’ve allowed what I believe to be a Thistle (and a wee Doc plant) grow in my plant pot; which also contains a baby Pineapple plant (the original inhabitant) on my windowsill at my house-share.  I shall consider this as saving a life 😉

Behind the Scenes: Video for the Wild

I chose the mystery location for yesterdays’ video, because I grew up a short walk away from it and was inspired by an episode of Countryfile where Anita Rani showcases rural Bradford 😛  Incase you’ve not seen the video, I’ll not ruin the ‘surprise’ with naming it.  It’s where I cut my teeth as a child and naturalist, so to speak and over the years I’ve seen loads of wildlife there, a few firsts, which includes the time I saw my first Weasel as a child!  Yesterday my friend Gary and I observed a Kestrel and Jay up there.

In the second shot of the intro to my video, I’m on the top of Rubery Hill/Cock Hill, with the Frankley countryside and suburb in the background, there are more great views from up there; the Lickey Hills, Rubery and Bromsgrove in the distance – plus the country park I reveal in my video 😉

When we were filming near Frankley Beeches wood, we heard and saw a beautiful male Yellowhammer – it’s the second time I’ve seen one in Frankley, (I’ve mainly distantly heard their song now and again) so I decided to record and feature this Yellowhammers’ song as the soundtrack for the video.  We could also hear the beautiful song of the Skylark in the distance, down near Lower Hill Farm.  On New Street, near the Greenbelt just before Frankley Hill Lane (which leads up to the Frankley Beeches Wood) I saw a partly Leucistic male Blackbird collecting worms, I almost mistook it for a Ring Ouzel!

Today I observed a male and female House Sparrow feeding on aphids from the wee Willow Tree that’s in my parents garden.

Video for the Wild

My favourite local patch – and why it matters to me:

Ode to a Secret River – the poem I mention in the video.

“Snap a picture of something blue”

A nice easy one today 🙂  I spent most of my day with my friend Laura at her Pet Store.  I’ve mentioned the shops’ unkempt Wildlife Garden in a previous Blog post, it’s where I took todays’ “something blue”.

Longbridge, in South Birmingham – the birth place and former home of Rover – has a new High Street and Green Space!  It’s on the site of where the said factory used to be.  The River Rea that runs through the area has had a habitat and Green Space created around it, and it’s pretty much established and looking lush now! 😀

Today I explored it after purchasing Father’s Day gifts (with my trusty mobile to hand for snaps and clips).

I saw a Grey Wagtail (which have some yellow feathers) down there to left of where the lad on the bike was.  The video below isn’t great but you can hear it calling 😛

I was really pleased that this new place is now a good feeding area for House Martins, there were quite a few wizzing and swooping around 🙂 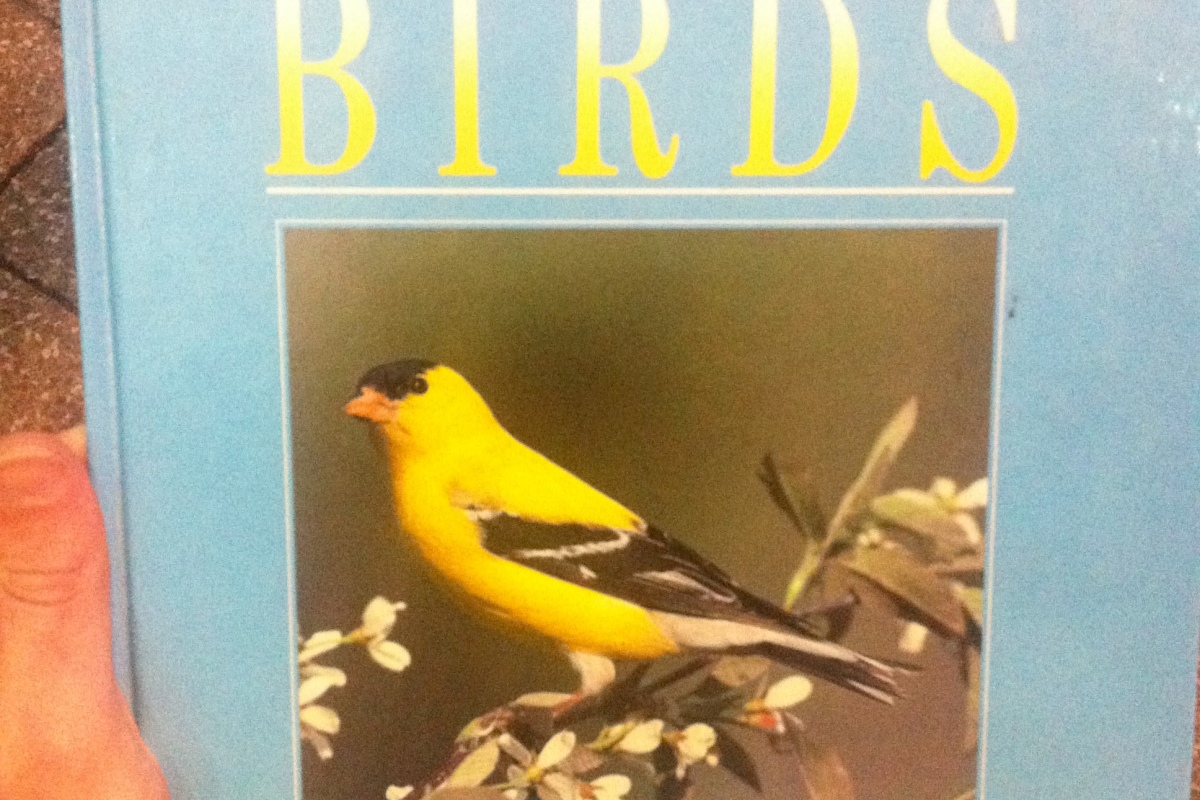 Today I was sorting out the blog for yesterdays Random Act of Wildness – “Admire the setting Sun”, it was raining and I had work later.  I wasn’t really left with many options, due to the constraints (time and weather).  So, I chose to read a non-fiction book on the bus to work (wildlife related of course). The bird on the front of the book is an American Goldfinch, it’s just a funky Siskin to us Brits 😛  I really like the first two paragraphs in the introduction for Section One of the book, so I’ve quoted them below:

Birds are not only one of the most successful groups in the animal kingdom but they hold a special position in our awareness of the natural world.  They are often the most obvious living creatures in a landscape (their apparent confidence borne of an ability to fly to safety) and their bright colours and melodic songs have long been admired by man.  Yet it is only recently that we have begun to fully appreciate just how intricate their lives are.
The 8000 or so species of birds have evolved over millions of years and have adapted to many different modes of life.  If one was to take a single feature which places the birds apart from all other animals it would be the development of feathers.  These complex and delicate structures not only make flight possible but also serve many other functions, notably providing insulation from cold or wet and furnishing attractive or eye-catching plumages for use in courtship and territorial rituals.

Such great facts! ❤  What a top way to introduce readers to a book all about birds.

I have to stop myself from quoting more paragraphs, so I’ll just quote one more.  From the top of page 8:

Birds have lived on earth for far longer than man or any of the mammals.  When giant dinosaurs roamed the world, there were already many kinds of birds inhabiting the forests, and wetlands and the marine environment.  They included some types which we would recognise today, such as grebes, herons and waterfowl.  In fact, it seems that birds are probably descended from small dinosaurs called coelurosaurs which ran standing up on their hind legs and balancing with their tails, much as birds do today.  Compsognathus is a typical coelurosaur.

This book was published in 1989 by The Hamlyn Publishing Group Limited.  It has 3 sections in all; Biology of Birds, Bird Habitats of the World and Bird Families of the World – covering all aspects.  It has a mixture of stills and illustrations, I think it’s a brilliant book.

Today I chose to admire the setting sun.  I had been at work, plus a couple things didn’t go to plan – so it was a nice relaxed way to end the day.  I took these pictures from my friend’s flat (again, with my mobile).

I then went up Rubery Hill a.k.a Cock Hill or the Quarry, to take the last of my photos. 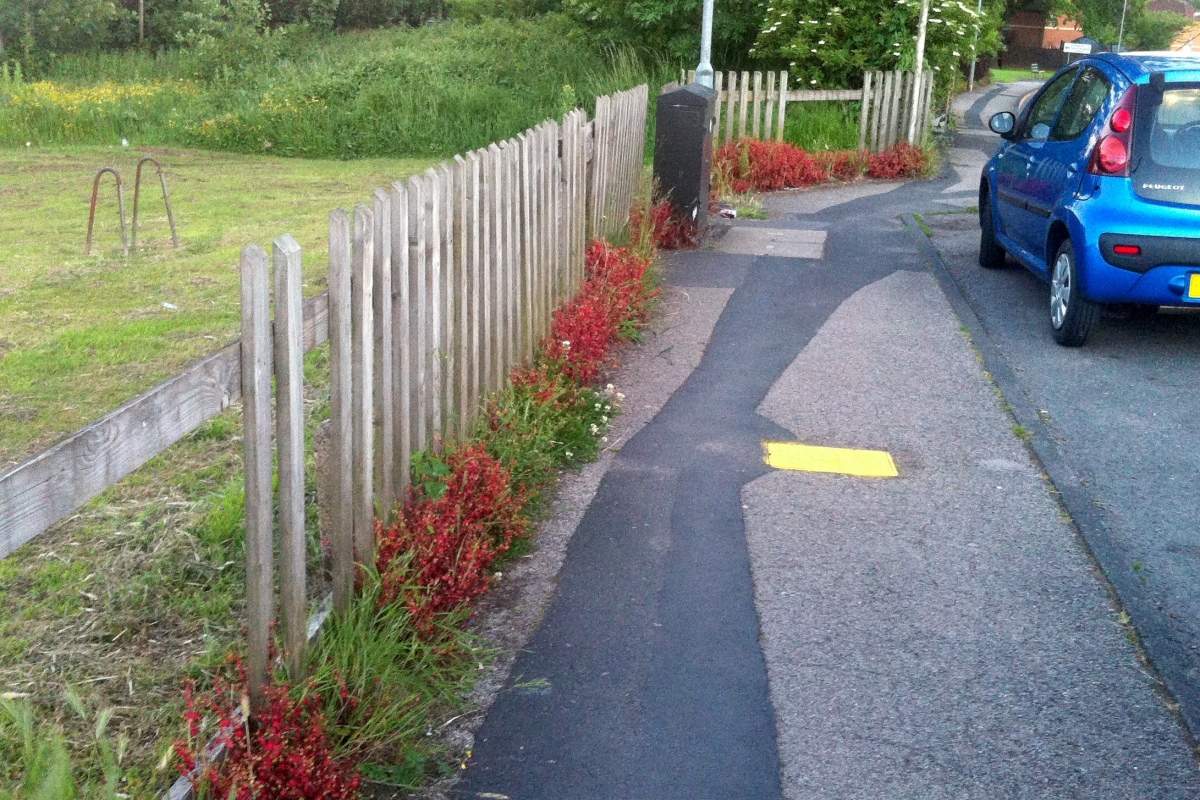 What Caught My Eye

For day 18, I decided I would take a picture of whatever caught my eye.  The first thing that did, was a lovely Green Shield Bug! 🙂 Later I went to visit my friend Laura’s pet shop, CavyNoodle Pets UK – in a village called Rubery.  The shop more or less has a Wildlife Garden out back, where various wildflowers pop up.  The Sweet Pea below, stood out to me. On the way back, I remembered the Shinning Cranesbill I passed on the walk down to Rubery was very red!  So on my way back up, I snapped a couple pictures.
These particular plants are red in colour due to the dry weather – therefore are nutrient starved, shutting down/stopping chlorophyll production and going to seed quite early.  The remaining sugars in the leaves give it its’ red pigment.  In away, the sugars have caramelised 😀

(I’m using my phone to do this blog entry)  I was at work early today and had to do a couple errands when I finished, then it rained continuously.  I had already danced in the rain.

So I was left trying decide what to do, sat in my parents kitchen, when my Dad said he had came across another interesting insect at work…

My Dad has came across various creepy crawlies at work, some living and some dead.  The Cricket thing is the second specimen he has came home with, below is the first.

“Invite a friend into nature”

We’ve had great day, the weather was wonderful.  We both hadn’t been before.  I was impressed by the variety of habitats (grassland, lakes, rivers and woodland) and species.

Today’s challenge was “invite a friend into nature”, but it was also chance for Gary to brush up on his photography skills  (I shall document what we saw below!)  And in line with the challenge, I did my best to teach Gary about all the various creatures we came across and the bird songs we heard.

There’s still a little bit more for us to explore, looking forward to the next visit! 😀